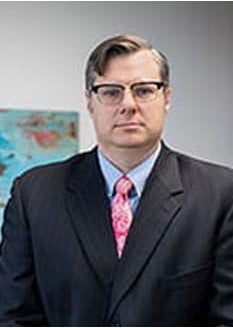 Kirk D. Holman of Holman Schiavone, LLC, comes from a hard-working New England family with humble beginnings. From the time he was a young boy, he yearned to be an attorney so that he could defend the rights of the underdog and champion worthy causes. He represents clients in Kansas City, Missouri, in cases involving civil rights, constitutional law, discrimination, employment and labor law and sexual harassment.

While in his first year of law school at the University of Missouri-Kansas City School of Law, Mr. Holman grew interested in employment law after a life-changing event in his family. His father was working in a ditch when the dirt collapsed because of a lack of proper supports. He endured numerous surgeries but was never able to work after the accident. His parents struggled on just his mother’s income, and he watched his father grieve the loss of a job that represented 35 years of employment.

As a respected speaker in the legal field, Mr. Holman has been asked to speak on numerous topics, such as issues in human resources, the Missouri Human Rights Act and the plaintiff’s perspective of corporations. Mr. Holman is considered one of the Top 100 Lawyers Missouri & Kansas “Super Lawyers”, a member of the Top 50 Kansas City “Super Lawyers” and has been named a Missouri & Kansas “Super Lawyer” every year since 2011.  He has also been honored as “Best of the Bar” for Employment Litigation by the Kansas City Business Journal.  Mr. Holman is also a  Member of “The National Trial Lawyers Top 100 Trial Lawyers” for the State of Missouri. The Association is a national organization composed of the Top 100 Trial Lawyers from each state. Membership is obtained through special invitation and is extended only to those attorneys who exemplify superior qualifications, leadership, reputation, influence, stature, and profile as trial lawyers, both civil plaintiff and criminal defense. He is rated AV Preeminent® by Martindale-Hubbell. This mark is a significant rating accomplishment – a testament to the fact that his legal peers and the judiciary rank him at the highest level of professional excellence. He has tried to verdict as first chair two verdicts in excess of $10,000,000, one additional verdict in excess of $5,000,000, and four additional verdicts in excess of $1,000,000. In addition to these seven and eight figure verdicts, he has to verdict as first chair thirteen verdicts in excess of $125,000.

He has been a member of both the National Employment Lawyers Association and the Labor and Employment Section of the American Bar Association since 2000.

Tell Us About Your Case.

Get A Free Consultation